Banking on lessons from the streets

They used to sell anything valuable they could lay their hands on – acquired legally or otherwise.  This includes cellphones and electric appliances they fixed.  They were unemployed and wanted to sustain themselves. Their market was responding positively.

That’s how they realized that they have a gift to sell. In 2014, they founded the Street Code Apparel brand. They print and embroider clothing for sale. But 2014? “Yes, we made a lot of mistakes in the past. Now the money we make goes straight into the business account. We are in fact, re-branding ourselves,” says the mastermind, Boitumelo Mathega. 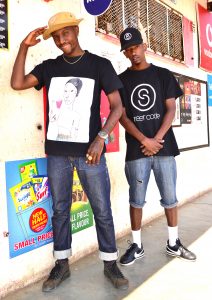 He, Sakhile Phetla and Payseen are planning to take on the Goliaths in the business. “We are motivated by hyenas. They are the only wild animals who can take meat away from lions,” says Boitumelo adamantly.

Their merchandise includes hoodies, T-shirts, caps and bucket hats (sporty). They dressed a few artists for their music videos and television shows. Street Code is targeting youth and people in the entertainment industry.

Their only challenge at the moment is dealing with a high demand for their merchandise. “Only if we could have our own machines. The demand is high,” Boitumelo says wistfully.

Boitumelo had to sell his car and quit his job as a call centre agent to focus on his dream. Also, he handed back keys of his landlord and went back home.

Their merchandise is sold through social media and word of mouth.