Women of the night 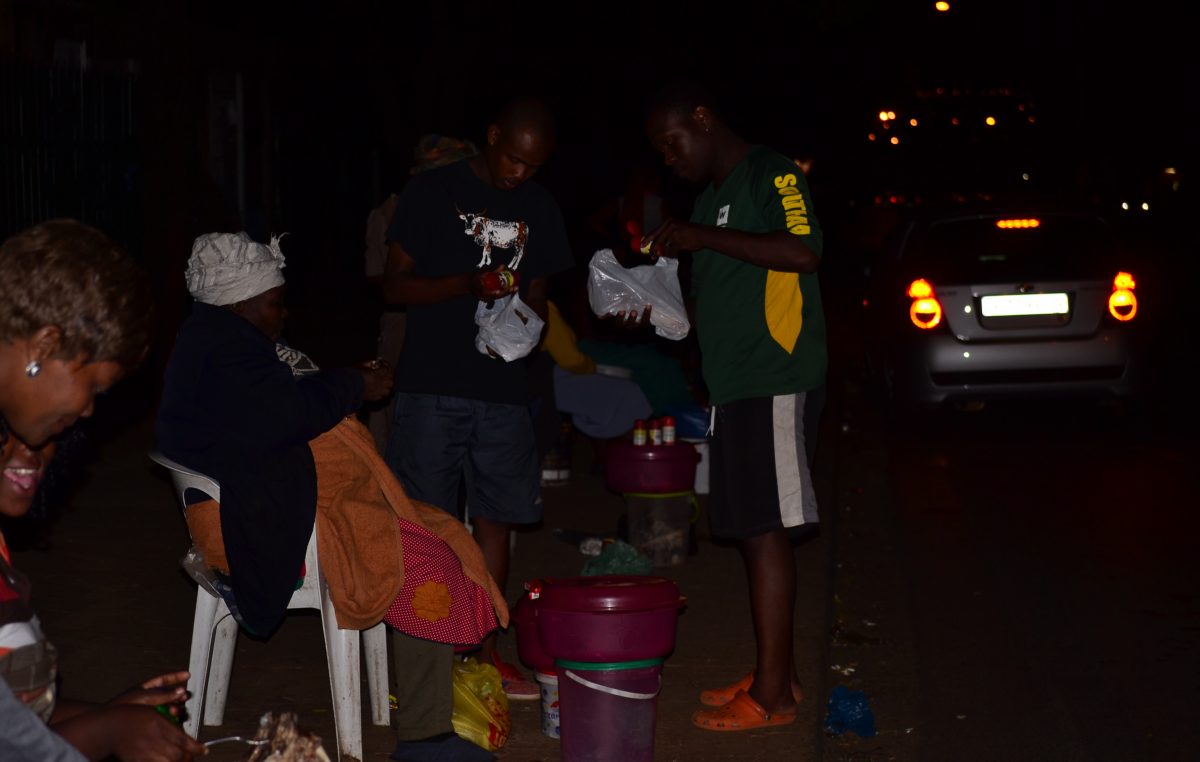 Sixty-seven years old Mme Mpoleleng Sebatla seldom sleep enough. Her life revolves around cow feet and sheep heads. Her business starts at seven o’clock in the evening until four o’clock in the morning. Her normal day starts at 05:30. She sleeps for about an hour almost everyday. “If you sleep, you’ll eat the excrement of other women,” she says assuringly.

At dawn she has to queue for the cow feet and sheep heads. “You won’t find anything to sell if you get there late. And what will we eat?” she asks, obviously not expecting an answer from anyone but herself. “It would be a day wasted.” Mpoleleng buys cow feet from one supplier and sheep heads from another – at two different places.

This Lesotho national came to Johannesburg in 1989 and was a domestic worker. When her daughter died, she didn’t have a job and had to take care of her grandchild. For survival, she sold amanqina – sheep and cow heels and heads that abattoirs consider drops. She buys, cleans, cooks and sells them.

Mme Sebatla has been selling her commodities at Phera and Mlangeni streets intersection in White City for eight years. “I am thankful to them [amanqina] because we don’t roam the streets naked. I just bought my grandchild school uniform to the value of R1 500. 00. I can afford to buy her some of the basics that children her age need,” she testifies.

Mpoleleng’s tiny one-room shack is among four others that are squeezed in a yard in White City. The landlord’s brick house is in the middle. She and her daughter share a double-bed that competes for space with a grocery trolley that she uses to carry her stock around; clothes bags; baths; dishes shelve and a many other unnameable paraphernalia. Mpolelelng says jokingly, “Sometimes when I want to sleep more restfully, I kick my grandchild out of the bed. She sleeps on the floor.”

The high temperature in her room was intensified by a two-plate stove that was heating up a huge pot full of cow heels. They will take more than three hours to be well-cooked. The cow foot is cut into three pieces; combined, the pieces cost approximately R25, 00. “It is hard work,” she says with sweat streaming down her face, “We have to shave these heads clean before we cook them.”

Her customers are mainly clubbers and party-goers who leave their entertainment venues in the early hours of the morning. “I love them so bad. They are the reason we stay up until the morning. They support our business,” she brags. “Our only distractors are the Metro police. I have lost 5 bowls to them. Everytime we see them we should hurriedly pack our items and run. But we have children to look after, hence we come back.” On a bad day she takes home R200. 00 and when she’s lucky she pockets about R400 on a day.

Bad days and the pestering Metro police don’t deter her; neither do extreme weather conditions nor the dark and treacherous streets that she braves to-and-fro her selling point. From her meagre income, she makes sure that she pays rent, buys grocery and saves for the rainy days.